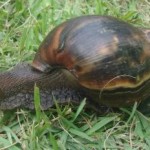 The Giant African Snail (GAS), sometimes referred to as the Giant African Land Snail (GALS), is one of a  group of large terrestrial snails native to Africa. It can grow to 8 inches in length and is regarded as one of the most destructive snails in the world as it will feed on over 500 plants and can survive in many  different environments. The snails are very prolific, capable of laying over 500 eggs in one clutch and producing subsequent clutches without needing to mate again. 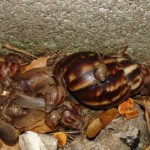 Extensive rasping (scraping) or defoliation of plants may indicate its presence, as may slime trails and large ribbon-like faeces. The giant African snail is nocturnal, feeding mainly at night but can be active during daylight hours on rainy days. Large adults are easily visible at these times. Look in protected humid areas, e.g., in leaf litter, grassy patches, under rocks or farm debris for juvenile and newly hatched snails.

GAS is native to East Africa but is now established in several countries around the world. It is present in areas of Africa, Asia, India and South America, on islands in the Pacific and Indian Oceans in the Caribbean. Isolated populations also exist on mainland North America.

The most important measures to adopt at present are: 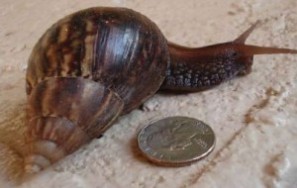 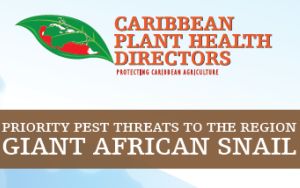