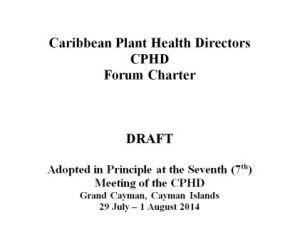 The CPHD Charter was adopted in principal at the Seventh (7th) Meeting of the CPHD – Grand Cayman, Cayman Islands – 29 July – 1 August 2014 and defines the organization’s structure, purpose, objectives, membership etc.

Here is an excerpt from the DRAFT Chapter:

With thesigning of the WTO/SPS Agreement, there has been liberalization in the trade of plants and plant products and an obligation on all countries to provide sound scientific data to support the application of any plant health measure(s) and regulatory measures to safeguard their agriculture. Countries and territories, in the Caribbean Region face immense challenges in fulfilling this obligation for a number of reasons such as; lack of financial and human resources, technical competence and capacity, infrastructure, and baseline data. Further compounding the challenges is the reality that the Caribbean Region is one of the few regions that does not have a functioning regional plant protection organization. A functioning regional plant protection organization provides a platform to address regulatory and technical issues relative to invasive species in areas such as pest detection, mitigation and exclusion, as well as ensure an active voice and representation in the WTO/SPS and IPPC forums.

The Caribbean Region, comprising mainly small island land masses, is faced with special situations that need to be considered when international agreements are being made including (a) a large number of vulnerable species, (b) a high number of endemic species, (c) vulnerable habitats, and (d) sensitivity to climate change/sea level rise. The food import bill in most territories also takes a higher percentage of government spending than in other parts of the world

In an effort to address the challenges facing agriculture in the region, the first meeting of Caribbean Plant Health Directors (CPHD) was convened in Georgetown, Guyana on 23-25 April 2008. This meeting was convened in collaboration with the United States Department of Agriculture (USDA), Animal and Plant Health Inspection Services (APHIS), the CARICOM Secretariat, the Inter-American Institute for Cooperation on Agriculture (IICA), and the Food and Agriculture Organization of the United Nations (FAO). Other organizations from the region that were included in this meeting were the French Agricultural Research Centre for International Development (CIRAD), Caribbean Agricultural Research and Development Institute (CARDI), and CAB International (CABI). Through this collaboration, twenty two Caribbean States were represented at the meeting. In this first meeting, the Chairman of CaribVET forum, the Caribbean Animal Health Network, was asked to present the format and functioning of that network. At the conclusion, the CPHD forum agreed to adopt a similar format and principles which guided the CaribVET.