The Complex Brain of a Fruit Fly

Dozens of scientists have spent years mapping the brain of the fruit fly. A detailed map featuring hundreds of thousands of neurons that fire between millions of synapses insides the poppy seed-sized brain of a fruit fly has been recorded. Neuroscientist, Vivek Jayaraman, who works for the Janelia Research Campus of Howard Hughes Medical Institute in Virginia, in collaboration with researchers at Google has been undergoing a project to map the brain of the fruit fly. While the work is still ongoing, some of the early findings of the research can be found in the journal eLife. 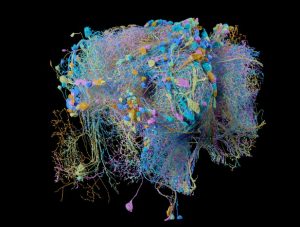 The research findings have ”identified new CX neuron types, motor pathways and novel sensory and networks motifs that likely enable the CX to extract the fly’s head-direction, maintain it with attractor dynamics and combine it with other sensorimotor information to perform vector-based navigational computations. ”

One of the highlights of the brain map is called a connectome. It’s a combination of machine-learning algorithms and manual labour. It’s a detailed diagram of the fruit flies 100,000 neurons and the tens of millions of connections between them.

The purpose of this research is to understand the complex brain activity of the fruit fly in finding its dinner, this is similar to how a human’s own thought processes navigate them in their reflex decisions.

Read more about this: CBC Radio