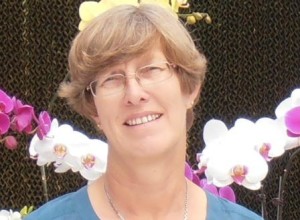 Alies van Sauers-Muller has been elected as Chairperson for the Technical Working Group for Tephritid fruit flies at the second meeting of this working group in Paramaribo in 2010.

Alies is the coordinator of the fruit fly research program of the Ministry of Agriculture, Animal Husbandry and Fisheries, at the Research Department in Paramaribo, Suriname. She has been responsible for the project since the detection of the Carambola fruit fly (Bactrocera carambolae) in 1986, including the extensive eradication program from 1998-2003, which came to a halt due to lack of funding. She has been a member of the Technical Panel on Pest Free Areas and Systems Approaches for Fruit Flies (TPFF) for IPPC, which was established to review scientific and technical data and to draft ISPSs in support of international agricultural trade through the establishment of pest free areas and systems approaches for fruit flies. She has been involved in training for fruit fly identification, trapping and control since 2000 with an FAO mission to Venezuela, and also worked as trainer/resource person for workshops in the Caribbean region and Brazil.

She has been working for the Research Department for over 35 years, being responsible for the entomology department until 1990, when activities within the Carambola fruit fly project increased, focusing on project development, research on biology, trapping and eradication methods. Originally from the Netherlands, she studied tropical agriculture, with a specialization in Crop Protection, and ended in Suriname as part of her internship. After finalizing her study in 1980, she returned to Suriname, to work for the government. She lives in the countryside on a farm.